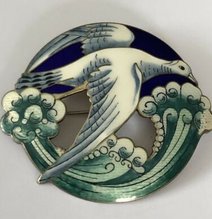 Aksel Holmsen was trained by David Andersen from1889 to 1892 in filingree work.He completed his journeyman's piece in 1901 and continued to work forDavid Andersen until 1904.

Then he established a silver and enamel workshop atStorgaten 7 in Oslo.

The workshop was a major supplier of enamel goods and later silver and silverplated hollyware.