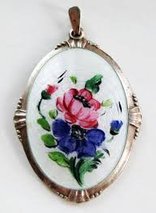 The workshop developed the production of silver, and silver enamel.

He designed and made their own jewelry and was a very creative person and an inventor.

In 1969, his son Per Arne Nordlie joined the company as a trained goldsmith and has continued the development of silver-enamel jewellery for both children and adults.

The company is still in full operation with a continued focus on the enamel.