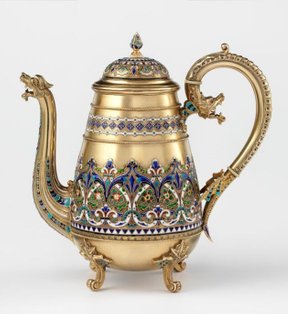 Johan Lund started his apprentiship with goldsmith Ole Gulsen Hæhre (1870-1898 in Drammen in 1881.

He worked for David Andersen in the later part of the 1880's as head of hand-chasing.

In 1889 he traveled to Berlin to further develop his ability in engraving and designing.

He returned to David Andersen in 1891 at which time he was given the enormoud task of designing the firm's collection for the World Fair in Chicago in 1893.

As a designer he is condidered to be one of the great pioneers of norwegian silver enamelling. Most of his designs were in the "Dragestil" ( Norwegian Art Nouveau) or "New Rococco" style.

In 1894 he became a manager at Norsk Filigransfabrikk but just 4 years later he was working as head of the workshop for Jacob Tostrup.

In 1889 he founded his own workshop and retail shop in Drammen which continued to operate until 1944.

During that period he was regarded as one of the very best medalist of the age.