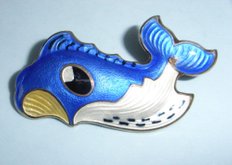 Kristian Hestenes apprenticed to goldsmith, Theodor Olsen, in Bergen and was officially licensed in 1904.

The same year he opened a shop with workshop in Strandgaten 89, Bergen.

He started out producing hand wrought spoons, but gradually switched over to mechanisation and began producing holloware too.

Flatware, holloware and jewellery items in silver and enamel formed the bulk of his production.