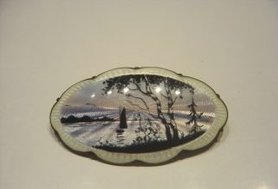 In the following years he worked for both Aksel Holmsen and Ole Olberg.

In adition to this, he worked for one and a half years as a goldsmith in Berlin.

Hjortdahl was officially licensed in Oslo in 1914 and which time he and Bernard Meldahl started up their own enamelling workshop.

Bernard Meldahl withdrew from this business in 1931 and Olav Hjortdahl continued on in the business under his own name.

When Olaf Hjortdahl died in 1954 his son Tore Hjortdahl took over the business.

The workshop was closed down in 1970. 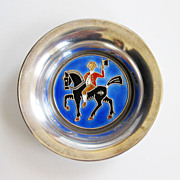