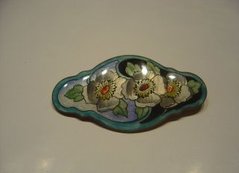 Ole Olberg began his apprenticeship in filigree work with the goldsmith's firm of  P.A.Lie.

For a number of years, he also worked for Marius Hammer in Bergen and later at Clemet Berg in Oslo.

Olberg completed his journeyman's piece and was officially licensed in 1907.

That same year he founded his own workshop where he concentrated on the production of filigree work for export and subsequently became a major manufacturer of enamelled goods.

In 1911, Olberg also opened up a goldsmith's shop which he ran alongside his workshop in Parkveien 25.