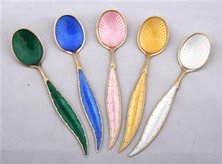 Ole Hval started his apprenticeship, specialising in holloware, at the firm of David Andersen in 1890 and completed his journeyman's piece in 1895.

Hval continued to work for David Andersen until 1907 and was officially licensed to practise in 1908.

At both the World Fair in Paris in 1900 and later in St. Louis in 1904 he won silver and gold medals respectively whilst working for David Andersen.

In 1908 he and silversmith Emil Kristiansen founded their own company Hval & Kristiansen, producing silverware items.

In 1927 they opened a shop at the same address in Storgaten 34C.

The company closed down in 1931 and Ole Hval opened a silver workshop of his own in Nordregt. 10.

At this time, it was taken under newThe factory was taken over by other interests and ran until the 1960s.

Hval's son Ottar Sverre Hval (b. 1903) served an apprenticeship under his father at Hval & Kristiansen.

Ottar Hval was officially licensed in 1931 and took over the business and shop of Hval & Kristiansen at Storgaten 34 and run both under his own name Ottar Hval. They later moved to Kirkegt. 36.

In 1933, when his father, Ole Hval pulled out of Østlandske Sølv og Pletvarefabrikk AS, father and son set up in business together under the name, Ottar Hval at Nordregt. 10.

When Hval & Kristiansen was dissolved in 1931 Emil Kristiansen together with silversmith Einar Dørum, founded a new company, called Norsk Sølvvareindustri AS, which eventually closed down in 1992.