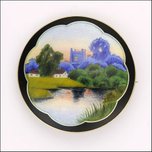 Thorleif Johnsen was trained in filigree at David-Andersen and took his journeyman's examination in 1910.

He received the craft certificate in 1912 and established a craft shop for gold and enamel work in Munkegt. 2.

In 1916 he began a shop in Pilestredet 27 under his own name, but later moved to Grønlandsleiret 1.

Thorleif Johnsen had a great variation of enamel production, and his hand-painted enamel brooches are especially well known.